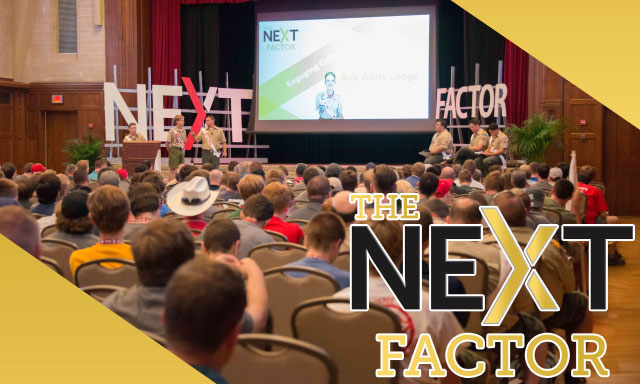 As NEXT comes to a close, we look back on the final and most anticipated event of the conference, the closing gathering. For the first time all week, delegates were in attendance by lodge. The gathering began with a final round of the NEXT Factor, this time featuring crews that were selected on site from the Innovation Center, instead of lodges that had submitted material before the conference. Following the NEXT Factor, an Operation Arrow promotional video was presented to encourage delegates to join our team at the Summit next year at the Jamboree. Then, National Chief Hunter Jones took center stage, giving a parting address urging Arrowmen to challenge the status quo and innovate.

The NEXT Factor competition was very close, as each idea brought forth was innovative and able to be expanded nationwide. Southern Region Chief Jeff Sedlacek sponsored Crew 27’s Wyatt Engelmann, an Arrowman from Miami Lakes, Florida. His idea was the Sash and Bash, and it was designed to boost brotherhood conversion and membership retention in his home lodge of O-Shot-Caw. Logan Greene, Central Region Chief, then brought forth the delegate he sponsored, Cameron Killian of Tulpe Lodge in East Providence, Rhode Island. This Arrowman from Crew 36 presented the idea of the gamification of the active arrowman award in his lodge. The final contender, John Roosevelt of Syracuse, New York and Lowanne Nimat Lodge, was sponsored by Western Region Chief Joe Garcia. Roosevelt, a member of Crew 15, spoke about the innovation of overnight LEC meetings – ones that would be more thorough and would allow LEC members to experience more fellowship with one another.

Following the presentation of the ideas, all delegates took to Mentimeter to determine the winner. After a close poll, an envelope was handed to National Vice Chief Tyler Inberg. Opening the envelope with all the dramatic suspense of American Idol, he read and announced to the crowd the winner of the NEXT Factor: Wyatt Engelmann from O-Shot-Caw and Crew 36 with the idea of Sash and Bash. All contenders received a round of applause and were lauded by Inberg and Chris Boyle, the Northeast Region Chief, for their efforts.
National Chief Hunter Jones gave NEXT a fitting end, reminding Arrowmen to never settle for less in life. “Why settle for mediocrity when you can have greatness?” Hunter asked. He called upon our founders and Pokémon as examples of people disregarding barriers and striving for constant improvement. E. Urner Goodman and Carroll A. Edson started our Order to turn young men into model citizens. Pokémon took their classic game and put it on the new platform of the smartphone. Jones explained that delegates were here for the purposes of tackling challenges in our home lodges and to assess where we are as an Order. He assured the crowd that the feedback given this week will prompt change in the Order of the Arrow. He emphasize, however, that change cannot occur solely within the national organization – it must occur back home in our sections, lodges and chapters. The speech ended with the reveal that each of us is the X, each of us is LeaderX and each of us can make a difference back home. At the end of the day, we must each make the choice to do so, to be leaders, to make this century even better than the last.