Day in the life of a crew guide 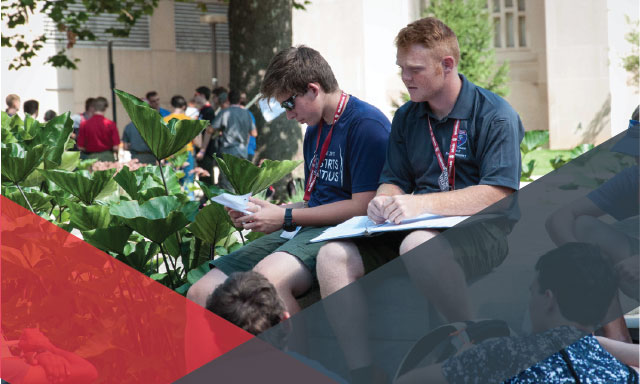 Small staffs have served the various committees at NEXT, each one playing an integral role in making this conference a memorable one. Compared to a national conference, the amount of Arrowmen serving as staff on NEXT is fairly small.  Each staff member had a critical role to play, but one particular group of staff members had daily contact with NEXT delegates. They are the crew guides, and their role is simple yet crucial  — guide crews through NEXT and around campus.

On Saturday, delegates arrived with their lodge contingents and were then were split into crews of 15-20 Arrowmen from across the country. Advisers were placed in crews with other advisers and youth were placed in crews with other youth. Delegates roomed with their crews all week and crew members all had rooms nearby, often on the same floor. They attended all trainings, gatherings and events with their crew. They would also often have discussions with one another to unpack all the information they received throughout the day. Finally, each night, crews would receive a debrief on the day’s activities.

How did the crew guide fit into this? Well, the crew guide also roomed with his crew members throughout the week. He was the one leading the discussions, the debriefs and the training sessions. He was the one who rallied the Arrowmen in his crew each morning to go get trained. By being a friend to their crew during the conference, the guide made his crew feel comfortable and welcome at this conference. Delegates were able enjoy this conference in part because of their crew guides having great dedication to making NEXT an unforgettable experience for their delegates.

Making staff members into these enthusiastic, dedicated crew guides was no easy task, though. Crew guides arrived early to NEXT and were trained the day before delegates arrived from 8 a.m. to 5:30 p.m. They were instructed on how to deliver the best program possible through learning about customer service, the essentials of crew guiding and how to teach training sessions on each of the three days of NEXT.

Once the conference opened on Saturday, crew guides started each day at 7:30 a.m. with a crew guide staff meeting. Following the meeting was breakfast and then training sessions and crew activities for the rest of the morning and afternoon, interrupted only by lunch. Afterward was dinner and an evening activity – such as the NEXT Factor event – before the final debrief at the end of the night.

Days were packed and there was little down time for crew guides, but it was very much worth it. “Being a crew guide has been a truly taxing, yet extremely rewarding experience,” said Anthony Peluso, crew guide and Section Chief of SR-7A, “in which you have the unique opportunity to make friends with people whom you will probably never see again, but will certainly never forget.” The crew guides making this event so great for delegates, and so memorable for all involved, will be why NEXT will be remembered as the event that marked the start of our second century into a new, innovative era in the Order of the Arrow.