OA Vision for the Future 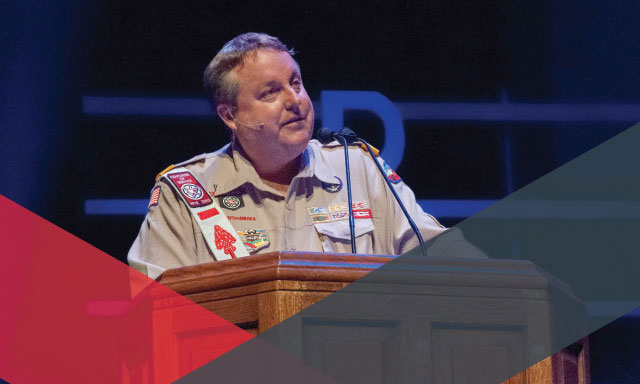 On Sunday night at NEXT: A New Century, at Indiana University, Mike Hoffman, the chairman of the National Order of the Arrow Committee, spoke about his vision for the new short-term business plan for the Order of the Arrow. After 38 years of service in the OA, including tenure as the national vice chief in 1985, Mike assumed the role of national chairman on June 1, 2016, taking over from his predecessor, Ray Capp.

During his talk, Mike described the business plan for the OA, which will focus on the upcoming three years and be modeled after the new business plan of the National Council. The OA’s plan focuses on the five pillars of leadership development, sustainable membership, brand/identity, reaching our audience and stewardship. With the purpose of NEXT being to create new, innovative ideas, these five pillars may evolve based on the feedback of delegates. With so much room for growth and revision, Mike doesn’t anticipate a public release until May 2017 at the earliest.

On Sunday, Mike called the OA “the gold standard of the Boy Scouts of America.” Mike shared a story about a meeting he had with Michael Surbaugh, Chief Scout Executive. “The Chief said that there are two things in the Boy Scouts that are not broken and working at high efficiency,” shared Mike, “the National High Adventure Base programs and the Order of the Arrow.” This raises the question, though, of how we will keep this up into the future. According to Mike, this will be done by returning to our core competencies and adding enhancements from there. “These are the same core competencies that you can name off the top of your head,” said Mike. He later breaks them down to providing opportunity for youth leadership, giving its members inspirational experiences, giving service to councils and providing individual development.

By continuing to expand our Order of the Arrow High Adventure program, we hope to be able to set it even further into the category of “gold standard”. Currently, the biggest challenge facing OAHA is light registrations, especially early in the year. Despite a very high satisfaction rate, Mike believes that Arrowmen simply don’t hear enough about it. “People just don’t know it’s that cool,” Mike said. Therefore, a major part of the OA business plan is to increase OAHA promotion to help it grow.

Mike went on to share that the Order’s leadership needs to pay attention to how the Order’s membership grows and to innovate in the areas of new member induction and Brotherhood completion rates. “It’s dramatic that we have so many of these kids who get elected and never complete their ordeal”, says Mike. Increasing membership relies on making the OA appear relevant to unit leaders; if it seems relevant and beneficial, unit leaders will naturally be more inclined to hold elections.

One of the most interesting things discussed was the possibility of a future event in late 2017, tentatively named the “Hack-a-thon.” The idea of Hack-a-thon is to make use of the high amounts of technological competency in our Order. Mike says that the reason so many companies fail in the tech department is because they can’t afford the resources for growth and development. This is where the OA can be different. By organizing an event that gives the IT power to Arrowmen, the National Order of the Arrow Committee hopes to create new tools that can be utilized by each lodge. Currently, it’s envisioned as being similar to the scene in The Social Network where the characters build the original version of Facebook. A group of friends sitting in a room – coding – with lots of pizza and fast food eaten in the process!

One of the things that may be designed at this event is an Order of the Arrow app. While no details were shared about the app’s functionality, other technological enhancements could include an inductions portal, lodge event registration functionality and more.

The OA endowment was formed as a means for the Order to fund special projects, such as High Adventure, scholarships and service grants. While discussing the future growth of the endowment, Mike said that some measures were already put in place. For instance, according to Mike, while the full fee for national events like the National Order of the Arrow Conference goes towards providing the best program for Arrowmen in attendance, when the trading post at that event turns a profit, half of the proceeds goes towards the endowment. “For instance, if $100,000 is made by the trading post,” Mike said, “then $50,000 of it is moved to the endowment.”

During his speech, Mike also made sure to highlight the key members of the National Order of the Arrow Committee who are tasked with these areas, many of whom shared additional details about the projects that would be forthcoming and relevant statistics.

With 101 years under its belt, the Order of the Arrow has had a long, successful past. Now, in order to look far into the future, we need to start at a few years out. Reaching the points defined in this three-year plan is an excellent first step. As we move forward into our next century, we need to keep it in mind in order to see the whole picture.

Mike’s slide presentation can be downloaded to view here.