Bob Birkby, an American adventure guide, author, photographer, speaker, and trail designer visited NOAC 2018 to participate in our Conservation and the OA panel and conservation project. Well known to many Scouts, Birkby wrote the BSA Field Guide and several editions of the Boy Scout Handbook. Growing up in rural Iowa, there weren’t many youth programs available to Birkby. Lucky for him, Scouting was not only present but thriving and held the key to unlock his passions for the outdoors and cheerful service. He traveled to summer camp, Philmont Scout Ranch, Northern Tier, the 1964 National Scout Jamboree, and many other amazing adventures with his troop. These experiences made such an impact on him he chose to pay it forward. Once Birkby made it home from his North Country-Baldy Mountain trek, he immediately applied to join Philmont Scout Ranch staff.

His first summer had him responsible for teaching Mexican cooking, and only a week to learn and prepare for a topic for which he unfamiliar. After learning, preparing, and getting to a point where he felt confident in his ability to teach the class, he found the first crew he had was from El Paso, Texas. After recovering from the initial shock and embarrassment, he was moved by their willingness to teach him what else he needed to know for the rest of the summer. The experience and his contact with other trail crews hooked him into the outdoors and the Philmont program. He spent the next five years as a foreman, conservationist, and the director of conservation.

While Birkby was a member of the Order of the Arrow as a youth, he remembers not being particularly active. However, he credits his contact with OA High Adventure trail crews at Philmont with keeping him involved and informed in OA activities. ArrowCorps5 meant a lot to him that he credits it as being a “big leap forward” in our Order’s sustainability efforts, making history, and helping to further ingrain OA service into the BSA high adventure programs. Birkby also professed his appreciation for the OA’s efforts, no matter the size, to demonstrate the importance of sustainability. He says even small decisions, like composting or reusable water bottles, make a big difference for the environment and help normalize good environmental decisions.

Birkby says the real challenge to sustainability efforts is the challenge of taking the experiences someone has in a service corps or on a trail crew and translate them into more sustainable decisions at home. He finds that it is hard to transfer sustainable thinking to the big issues and to break through the politics and national debates. To him, people are generally making good decisions on a personal level, it’s just harder to take the bigger step to issues like public land conservation. His focus in Scouting has been largely based on helping to make the transition real through training and literature.

Birkby’s main credit with the BSA includes writing the 10th, 11th, and 12th editions of the Boy Scout Handbook, the 4th edition of the Scout Fieldbook, and both editions of The Conservation Handbook. During writing, he relied heavily on his own Scouting experience while also referencing his other outdoor experiences, other experts, and values of Scouting. To him, it’s been a great avenue to explore things that interest him while putting the promise of Scouting and great skills to paper.

He finds himself quietly smiling when reflecting on the impact he made on generations of Scouting. He fondly remembers his own handbook, the 6th edition with Norman Rockwell, having the cover art of a Scout cheerfully striding by. It guided him to learn astonishing skills and explore adventures different than his usual farm life. He felt it meant a lot to a little farm kid that he was learning the important things in life he would need down the road. Now he finds great satisfaction in seeing youth following in his footsteps with the books he has written and finding their own things to take away.

When not writing, Birkby spends most every extra moment outdoors. He has hiked the entire Appalachian Trail in 5 months, portions of the Pacific Crest Trail, and works as an independent contractor/adviser for the National Park Service. He also works with the U.S. Forest Service on conservation and trail-building efforts. Here at NOAC Birkby continues to work tirelessly including helping at the Arrowman Conservation Trail Project. Birkby is a shining example of how we can all Decide our Destiny here at NOAC 2018. 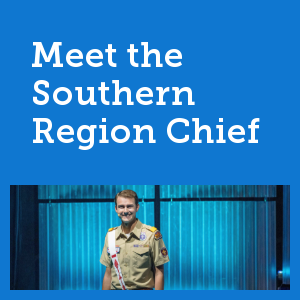 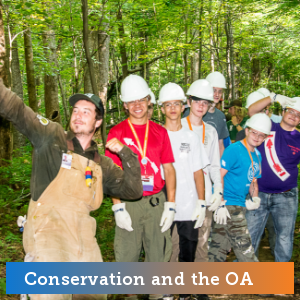 The Order’s Involvement With Conservation 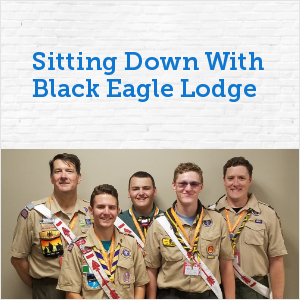