Featured, It Starts With Us, Shows

Dr. Robert M. Gates discusses his ordeal, career and the future of Scouting 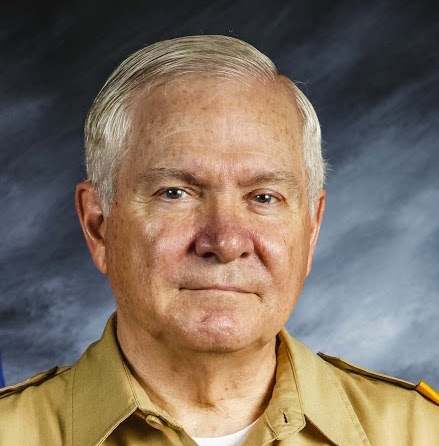 Dr. Robert M. Gates is the national president of the Boy Scouts of America.  Prior to his current service role, he served as the U.S. Secretary of Defense, the director of the CIA and a member of the national Order of the Arrow committee. Gates has served or worked for eight presidents of the United States.

He generously agreed to give a few moments of his time on Tuesday to answer a few questions.

Q: What was the extent of your involvement as a youth? Did you ever expect to be where you are now?

Gates: Absolutely not… Boy Scouting was a big part of my life… back in the 1950’s there were only three television channels… and so Scouting, family, church and school were about it. So I was a Cub Scout and then a Boy Scout and… as I‘ll describe tonight, I did my Ordeal in the middle of a blazing hot Kansas summer and I did my Vigil in an absolutely frigid Kansas winter. So the opposite extremes. My first NOAC as a Scout was in 1958 at the University of Kansas.

Q: What were some of the other highlights of your time as a youth?

Well, I think certainly two trips to Philmont were huge for me. One year I went as a hiker and another year I went to what was then called the National Junior Leader Training program and as I write in my new book that will be out in January, that National Junior Leader Training was the first and last formal leader training I ever had ­ so it had a big impact on my life.

Q: Now what made you choose the career path you did and how did Scouting have an influence on it?

It was totally by accident ­ I went to college as pre­med; [I] ended up majoring in history. I was going to teach history and was interested in Russia and Eastern Europe. [I] went to grad school at Indiana University. [I] signed up to see a CIA recruiter so I could get a free trip to Washington,
D.C., and they offered me a job and as they say, the rest is history.

Q: What are some of your experiences as a young professional that guided you later in your career to eventually become the director and later the U.S. Secretary of Defense?

Well, I think the basic lessons that I learned as a kid in Scouting were fundamental ­ as I said, the National Junior Leader Training was the only management course I ever really had. As I describe in [my] new book, there’s nothing to teach leadership skills than being in charge of a bunch of 12 and 13 year olds and trying to get them to do what they don’t want to do when you’re only a year or two older than they are and you can’t make them do anything. So there are a lot of lessons in that.

Q: If you were to pick a single quote or piece of advice that guided you through your career, what would it be and why?

I think it’d be very hard to pick one quote; I think it‘s fair to say that through my life I’ve tried to stay guided by the Scout Oath and Law and those are about as good of quotes as I have.

Q: Would you credit anyone as the largest benefactor to your success? Who would that be?

No, I had a lot of mentors along the way. I still remember the names of my Scoutmasters and my Explorer post advisor. They were — obviously beyond my parents — an important influence on me. My parents obviously were the most important. I have a photograph in my library of my father in a Boy Scout uniform standing in front of his house in Kansas City, Missouri, taken in 1918. So just eight years after the founding of Scouting my father was a Scout. He never was an Eagle Scout, which perhaps explains why both my brother and I are.

Q: Obviously you’re here at NOAC, and it’s awesome to have you here with the Arrowmen. Why was it important for you to come here to NOAC and spend some time with us?

Well, it’s a little bit like my feelings while I was [secretary of defense] and president of Texas A&M University. You spend all your time in these roles — in meetings and making big decisions and so on. What makes it worthwhile is the opportunity to mingle with the students, to mingle with the troops, to mingle with the Arrowmen. Because it brings down to Earth the reality of the decisions you make and sort of restores your sense of perspective and frankly for me it’s an energy boost. I used to joke that my idea of rest and recreation while I was secretary of defense was to go to Iraq and Afghanistan but that was because I got to spend time with the troops and they always revived my spirit. Being around the young people that you lead has always been restoring for me.

Q: As we talk about servant leadership,  obviously the OA is all about that —brotherhood, cheerfulness, and service — what’s your message to Arrowmen about that and how do you keep sight of that as you go through your life?

That will be a fundamental part of my message tonight. What’s going to happen is that this country and world in the decades to come is going to depend on the kind of leadership that these young men are willing to accept and the responsibilities that they are willing to take on and the roles that they’re prepared to play in our country. It really is about servant leadership and if we can not put down our responsibilities and leadership as a country, then we certainly cannot put them down as individuals. These young men I think understand that better than almost anyone their age.

Q: A lot of emphasis this week is on chapter chiefs and lodge chiefs which is obviously the entry level of leadership in the OA. Did you ever serve in any leadership roles in the OA?

Not as chapter chief or lodge chief. I had, as I recall, some other offices. But in all honesty, that was a long time ago and I don’t remember.

Q: I’m curious to get your take on how important it is to get whatever role you have in the OA and to really do it well.

The thing that you realize, particularly in military, is that success or failure at the end of the day ends up being laid on the shoulders of the young officers and noncommissioned officers that are out in the field. So on the volunteer side, on the participation side, those at the lowest rung, the analogy I would use is that those are the guys in the trenches, and the success of the entire movement depends on their success and carrying out their mission; the rest of it is all hierarchy. The more senior you become, the more removed you are from the people who are actually accomplishing the mission out in the field. I would draw an analogy between chapter chiefs in the Order of the Arrow to the district executives among the professionals. These are the young people we depend on to deliver the movement. Basically, the rest is overhead, including me.

Q: There is a lot emphasis on history here this week and on our future. Where do you see the future of Scouting and the OA?

I wouldn’t be doing this if I didn’t think it had a bright future. I think the decisions that have been made in the last few years create new opportunities for us, new challenges. But I think in a way the future of the movement — and again I’ll go back to my experience as the president of Texas A&M — the fact that [we are] sort of in a revision of what was the case 30 to 40 years ago. In college admission, having the rank of Eagle Scout is now a big positive on resumes and that’s because admissions officers in universities as well as people who are hiring young people for jobs, the Eagle rank, even if they don’t know much about Scouting, what it represents is somebody at the age of 12 or 13 setting a goal and showing the persistence and the willingness to work hard to achieve that goal 2 or 3 or 4 years out. That is the best indicator of likely success in college or success in work and I think that is one of the reasons that because of what Scouting does in terms of building work ethic, in terms of discipline, in terms of persistence, in terms of leadership skills and working within the framework of a team that, I think a lot of people see those who have been in Scouts as the kind of person they want in leadership outside of Scouting.