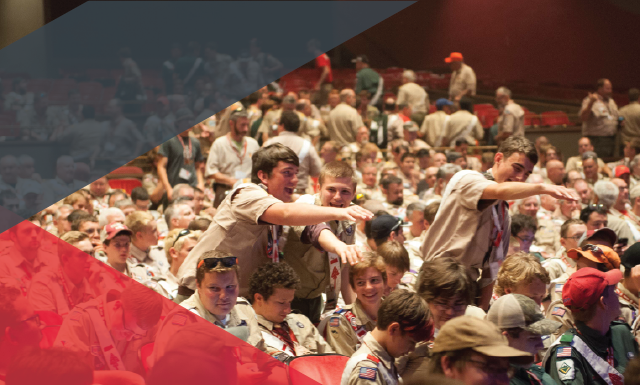 Bright lights, fog, giant criss-cross structures emblazoned with the words encompassing the goals of this week and a giant X: all part of the brotherhood gathering Saturday night. The goal, as said by Gatherings Lead Zach Sager, to “provide delegates with a glimpse of what is to come,” rang true in the show.

An Arrowman walked straight out onto the stage amidst a negative list of perspectives on innovation and imagination. He added his voice to the seemingly endless amount of disheartening, stubborn statements as he threw down notecards. Soon a glimpse of hope came forth as another brother walked on stage, bringing a sense of positivity as words like create, dream, and imagine rose up with the front portion of the stage. The gathering had officially begun.

Even more Arrowmen came forth and brought a message about the many doors that stand in the way of our future in the form of perspectives, decisions and actions, as well as how we could break down those obstacles. There was also an inspiring video where, as a man ran across the screen, the reality that we get back what we put into life resonated in the hearts of the delegates in the audience. Then, a video clip from a TED Talk – an idea spreading format – reminded attendees of the importance of listening in building relationships with others.

National Vice Chief Tyler Inberg talked the audience through an interactive experience. He asked everyone in front of him to close their eyes and imagine a mountain. The mountain became a metaphor for the goals that we all have as leaders. We traveled with Inberg in our imagination, going through the reality of the bumps and bruises that come with achieving our goals. The summit became not the end, but a viewpoint for other mountains or goals around us.

The focus of the rest of the NEXT conference was laid out as the Region Chiefs and Conference Vice Chiefs came out and discussed the future plans of the week. Southern Region Chief Jeffrey Sedlacek, Northeast Region Chief Chris Boyle, Western Region Chief Joe Garcia and Central Region Chief Logan Greene came forth to elaborate on the NEXT Factor competition, Mentimeter, and other important updates about the conference.

Soon after, the Conference Vice Chiefs of Innovation, Membership and Program came out to describe the focus of the three days following the show. The rest of the CVCs then came up alongside the other three and described the impact and goals of their committee in relation to the overall program of NEXT.

The Brotherhood Gathering energized participants for the rest of NEXT: A New Century and prepared them to make an impact on the future of the Order of the Arrow. Delegates were able to be introduced to the leadership of the conference, and, Sager says, learn about “the intersection of innovation, membership and program.”